TMS and Museum Model Learning Highlighted by the AJC 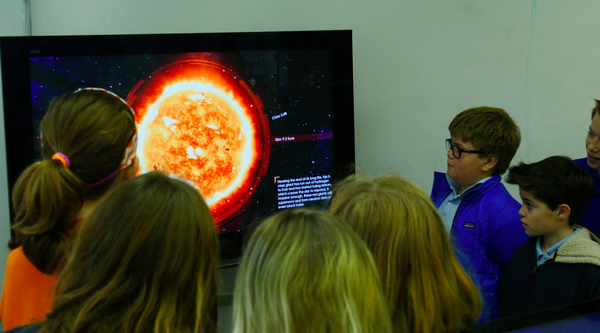 The Museum School was recently featured in the Atlanta Journal Constitution, for our unique museum model curriculum and curricular partnerships. Read the story below, or on AJC.com.

About 10 years ago, the goal of adding a charter school to the Avondale area got parents studying various models, but one stood out from the rest.

“We realized that this area of DeKalb – and the state – was missing out on an innovative model called the museum school,” said Katherine Kelbaugh, the school’s principal and founder. “We created the first museum school in Georgia and one of 45 across the country.”

When the Museum School of Avondale Estates opened in 2010, 135 students enrolled in classes from kindergarten through fifth grade. Seventh and eighth grades were eventually added, and this year, 515 students were accepted, with almost 500 on a waiting list. The interest fueled a move in 2012 from modular buildings at Avondale Baptist Church to the former Forest Hills Elementary building.

What distinguishes the museum model from other educational approaches is its partnership with museums and research institutions that allows students to get out of the classroom and engage in hands-on learning. A few times a month, youngsters head out to sites such as Zoo Atlanta, the Georgia Aquarium, the Atlanta Botanical Garden and the High Museum of Art where their lessons move from books to the real world.

“These trips are very focused so they engage with programs and exhibits that align with what students are learning in the classroom,” said Kelbaugh. “In addition, our curriculum is based on 9-week units followed by ‘museum night’ when they show off exhibits, projects and performances they’ve created. We have a 99 percent participation rate of kids who are proudly demonstrating their work. When you walk through our halls, you see rich displays and projects that show students really understand the information and apply critical thinking skills.”

The museum model also invites partner institutions to come into the school and work with students to get feedback on projects or programs in the development phase.

“It’s important that these partnerships are mutually beneficial, so we can give back to them, too,” explained Kelbaugh. “One of our partners, Fernbank Museum of Natural History, is working on an exhibit called ‘Stories in the Sky’ and asked if we could pilot it with our sixth graders. The designers shared the exhibit, and students gave feedback and about what changes they’d like to see and what stories would make it more appealing to young learners. At the same time, the students got to learn about different types of careers. And since the project centers around constellations and myths, it was a great opportunity to consider the literature component to science as well.”

Ben King and his colleagues from Artifact Design Inc., the company developing the “Stories in the Sky” exhibit, said sharing the project with Museum School youngsters was positive for both groups.

“They were so insightful,” he said. “We worked with two sixth-grade classes and taught them how to concept an idea, design, come up with a prototype and do user testing. Then they played with the exhibit and gave us feedback. It was really surprising what they came up with. We went in thinking they’d want more games, but we learned that they were really interested in telling a story and engaging the user on a journey. We didn’t realize how big that was for them.”

That sort of collaboration that defines the museum model is working, said Kelbaugh.

“Based on testing data, our scores compare to the state and district; we are in the 80s and 90s for every subject, every grade level,” she said. “Between 75 and 85 percent of our students are growing at a faster rate and mastering information faster than peers across the country. It’s an engaging model that works well for practically all kids.”