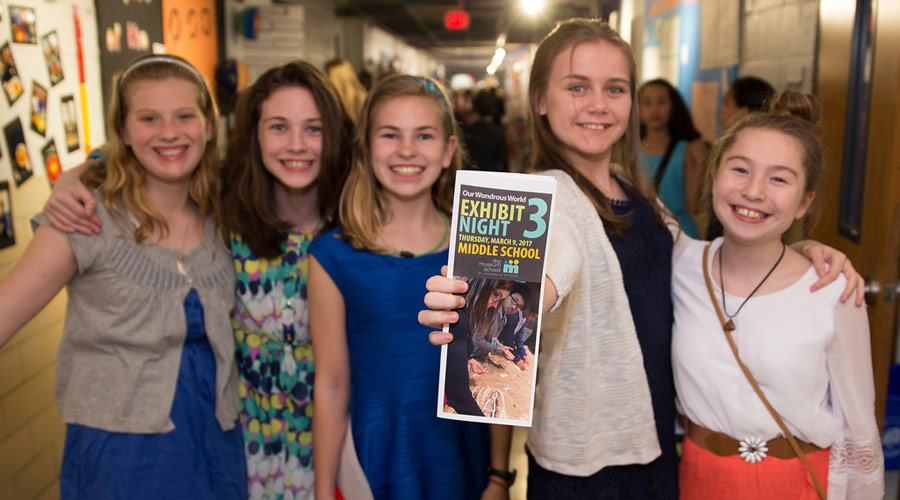 In a winter full of exploration, our middle school students have been making scientific discoveries, relating math lessons to everyday life and uncovering the history of our own nation as well as others around the world.

Digging into geography, they studied plate tectonics and fossils, rocks and Earth layers. They put evolution into action in the classroom and became new experts in the scientific classification system. Middle schoolers contemplated gravity, inertia and friction as well as velocity and acceleration. They built simple machines and learned about complex ones. In math class, they worked on calculating surface area and volume, making scale drawings of the school’s playground, and learning to graph lines on a coordinate plane. The focused on persuasive writing, creating advertisements and marketing campaigns, and they worked on developing claims and using evidence in argumentative writing.

Explorers studied the geographies, governments and histories of Latin America and Southern and Eastern Asia as well as environmental problems facing several Latin American countries. Starting with the Civil War’s destruction, students followed Georgia through the tumultuous decades that followed, from Reconstruction through the Civil Rights Movement.

Sixth graders have been exploring geography and tackling some pretty tough topics, including the Rock Cycle, plate tectonics, fossils and layers of the Earth. Putting their new knowledge to use, they created models showing the Earth’s layers and produced a stop-motion video explaining how the planet has changed over hundreds of thousands of years.

Throughout the third academic quarter, students focused on persuasive and argumentative writing. For Exhibit Night, they created persuasive marketing campaigns for new products. They used ethos, logos and pathos to create advertisements to reach target audiences. Explorers also shared a Shark Tank-esque multimedia presentation with their peers. In addition, after reading The Wave, by Todd Strasser, they wrote persuasive letters, urging school boards around the country not to ban the book and highlighted the lessons it can teach. Finally, sixth graders examined the idea of fake news and learned ways to determine the credibility and reliability of sources.

Focusing on geometry, students worked on calculating the surface area and volume of boxes and then cut open the boxes to make nets – a mathematical term for making a 3-D figure into a flat, 2-D shape, exposing all of the faces.

Sixth graders immersed themselves in the study of Latin America, examining the region’s geography, government, economy and history. They learned about environmental issues facing modern Latin America, including air pollution in Mexico City, deforestation in the Amazon rainforest, and oil pollution in Venezuela. In large collaborative groups, students created murals depicting the beautiful environments of these countries and the harm being done to them. Explorers also studied important historical groups and individuals, including Aztecs, Incas, Spanish conquistadors, slaves brought from Africa, independence leaders, Fidel Castro, and Zapatistas from Mexico. 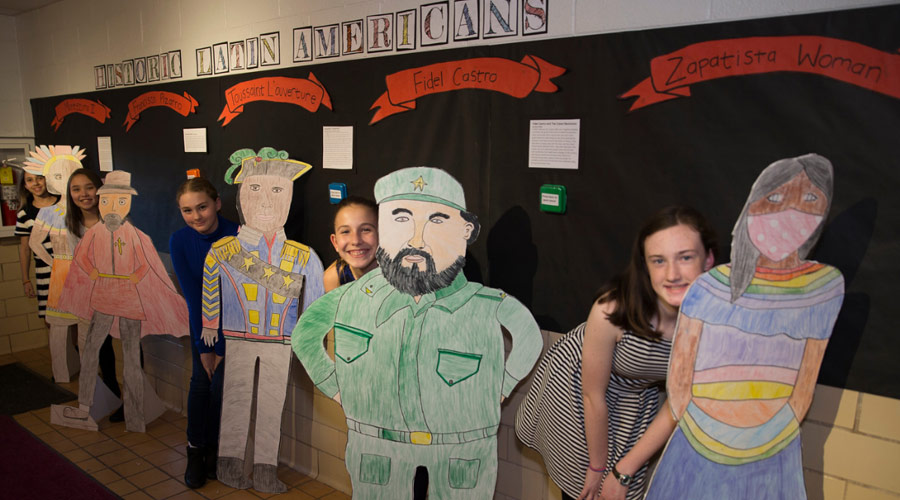 With a hands-on approach to learning about evolution and classification, seventh graders camouflaged butterflies around the classroom, participated in multiple labs to show the advantages of certain adaptations, and completed a Socratic seminar on related topics. They also examined the scientific classification system, and with a Classification Choice Board, they’ll demonstrate their knowledge of dichotomous keys, classification and species found in Georgia.

The subject of scale drawings took a fun twist for seventh graders, who measured The Museum School’s playground and created three different-sized maps of the playground to scale. To accomplish the task, students first created each scale factor and then calculated the correct scaling of each dimension of the playground and the equipment.

Working on the technique of graphing lines on a coordinate plane, accelerated math students learned about slope,  x-intercept and y-intercept and looked at applications for the technique, including finances for a small business. They also studied probability and statistics for data sets that measure two variables. For Exhibit Night, they created a scatter plot and line of best fit for real bivariate data.

Southern and Eastern Asia were the focus of the seventh grade’s social studies course. Students explored types of governments, economies and key historic events in the region. In ELA class, they read and analyzed Malala Yousafzai’s memoir I am Malala, in which the youngest Nobel Peace Prize winner describes her experience advocating for education rights in Pakistan while the Taliban’s influence spread. In addition, seventh graders began studying argumentation. Students created a dialectical journal to develop claims, evidence, and warrants in ELA class. In social studies class, they created projects that incorporated propaganda techniques, including bandwagon, glittering generalities, testimonial and name calling. Throughout the unit, students shared current events to connect to the topics, they read independent novels and shared suggestions with their peers, and they participated in Socratic seminars to consider themes ranging from qualities of leaders to education access to a society’s health.

Our oldest Explorers tackled some weighty subjects in science class, beginning with simple and complex machines. Students created Rube Goldberg drawings of a series of simple and complex machines to perform a simple task, and they built catapults and pinball machines to demonstrate simple machines and the concept of force. Eighth graders studied gravity, inertia and friction and their effect on the balance of forces, and they undertook lessons on mass and distance and their effect on the gravitational pull of an object. After adding new knowledge of velocity and acceleration, students designed and created picture books and comics illustrating Newton’s three laws of motion.

Eighth graders worked on graphing lines on a coordinate plane, learning about slope, x-intercept and y-intercept, and looked at real-world applications, including for the finances of a small business. Students also studied probability and statistics for data sets that measure two variables.

Following Georgia’s path through Reconstruction and post-Civil-War Rebirth, eighth graders explored the cultural changes that led to Modern Georgia and the early Civil Rights Movement. They learned about the destruction of the Civil War, the social, political and economic policies of Reconstruction and the era of the New South. Using biographies and speeches, they focused on direct and indirect characterization of historical figures and wrote their own biographies and speeches based on those characterizations.

Their lessons took our Explorers to the streets of Atlanta to see evidence of history in person. At the Fox Theatre, students watched a play about the struggles and triumphs of Harriet Tubman. On an Auburn Avenue walking tour and a visit to the APEX Museum, they learned about Atlanta’s African-American leaders during the New South era. They visited the home of Alonzo Herndon, the first African-American millionaire and an Atlanta leader who shaped the city’s early Civil Rights Movement. And watching the movie Hidden Figures, they saw how the long fight for civil rights continued in all aspects of life into the 1960s.