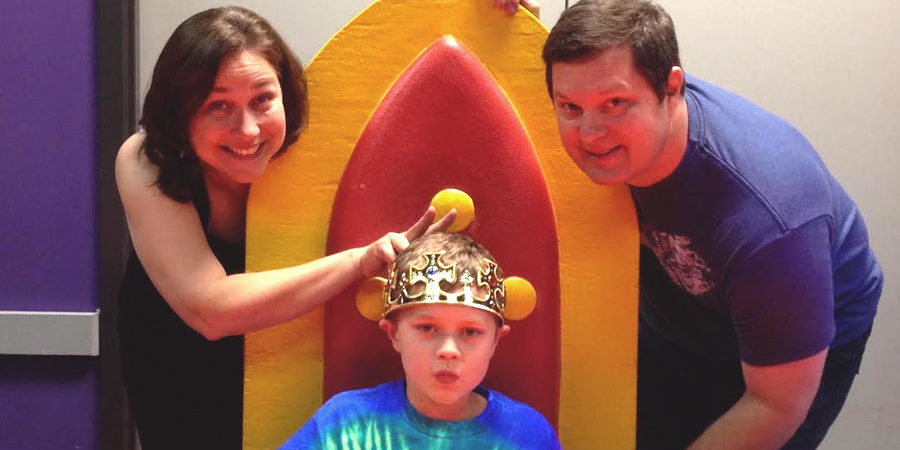 You all may recognize the Crownover name from TMS Auction Night. Dean Crownover is the illustrious “auctiontainer” who has helped us raise hundreds of thousands of dollars over the years. Amy, on the other hand, may not be in the spotlight, but she has made her own impact as our resident grant writer extraordinaire! Amy’s efforts and dedication to the school have raised millions of dollars to fund much needed expansions to the school, including our new front office.

In this interview, we’re shining a little spotlight on Amy and all her hard work!

Tell me more about your family?
My son, London, is oh-so-quickly approaching 10 years old. He’s in Ms. O’Malley’s fourth grade class and has a fantastic imagination. He has a wide range of favorite things – right now it’s WWE and Harry Potter and Pokémon – all at once if he can turn Harry into a wrestling champion and master trainer. He loves to draw and tell stories of wild adventures – real Indiana Jones type stuff. He likes trying on new characters, so we are often creating costumes out of whatever we can find around the house.

How long have you been involved at TMS?
Since before it had a name. Since the Avondale Education Association started kicking around the idea of a little charter school project that became known as the “Avondale Estates Charter School Initiative.” Since long before my husband, Dean, had taken to the stage as a benefit auctioneer to raise money for it.

Dean and I moved to Avondale Estates when I was pregnant because we loved the neighborhood. I wanted to learn about the local public schools, so I volunteered to tutor at an elementary school. Over the course of the year and several family discussions, we decided that this school would not be a good fit for our family.

A neighbor told me about a community meeting called to discuss building a charter school, and I went to hear about it. I remember sitting in a room full of people I didn’t know, just a few faces I’d even seen around the neighborhood, and it was both intimidating and inspiring.

I was the one parent on the board back then that didn’t have a child in school yet. I naively thought I’d just be around for six months or a year to help get the charter ready to submit. I had no idea it would change my life.

The community discussions narrowed to an executive committee that met regularly and OFTEN and had marathon meetings.

We had serious work to get done and each one of us had a critical role in that work. It took every one of us to build the framework – the educational model was the easy part. Then we had focus on school operations, find or build a space, raise money – quickly – and find the perfect principal. Which we did! I look back and wonder what it would have been like had anyone been in a different place at a different time.

There was a determination around getting this work done that was intoxicating. But it was not without conflict. I lost a lot of sleep (beyond the sleep of a first-time parent!), and I learned more about collaboration and leadership during that time than I intended to – I suspect we all did. We were all so incredibly passionate, so invested in creating something that our kids and the community would love, that it was more than a full-time job on its own.

Honestly, it was exhausting. I was often doing research and writing emails in the middle of the night – and I would get responses from other parents doing the same thing. It truly took the whole village and then some.

I vividly remember sitting with Principal Kelbaugh in City Hall at 3 in the morning, splitting a pack of M&Ms while plowing through every minute detail of the Implementation Grant to the Georgia Department of Education. There were so many “firsts” in those days. Some of us grew up together through this experience.

What were some of the challenges you faced in the early days as a parent and as a fundraiser?
My son was still a baby when the community came together to discuss school choice. London went to kindergarten the first year we were in the new Forrest Hills space. His memories of the modular unit are probably only of watering the “lawn” in the hope of having grass by the time the school opened; of many play dates with other founding board members’ kids while we were meeting; of running in the hall while mommy was in a board meeting – but the real world began for him at the new facility.

As a fundraiser, I began writing grants professionally around the same time I began my communications work with the charter school effort. I quickly realized that we needed me to get pretty good at grant writing to start bringing in real funding. The challenge was that we didn’t have any history, so foundation funding wouldn’t come easily. We had to kick it forward personally until we could get anyone outside our own community to believe in us. Oh, and there was that little charter agreement we had to get first. And then again. And we had to build the facility. And then again.

How does it make you feel to look back at all of the accomplishments the school and foundation has made?
There are many days I still can’t believe we did it. It was an emotional roller coaster.

Looking around the room at the school’s auction this past weekend brought it all home for me. We have grown from a determined little group of parents and community members sitting around a table In City Hall to a real-life school choice of excellence with a large, supportive community. And I believe that parents and educators look to our school to continue paving the way for quality public education in Georgia.

Looking around at this school community, this increasingly diverse school community, and hearing parents talk about how it has changed their lives, I feel very proud. We talked once of creating a neighborhood school where kids could grow up playing together in the park, and every time I walk through Willis Park after school, I see that it has come to life. I meet people all around Atlanta who don’t know I am connected to the school, and when they hear where London goes to school, they say, “Oh, wow, you are so lucky you got in. I hear it’s amazing.” And it is.

What do you want to see for TMS in the future?
I would love to see the school become even more of a model for others. I am so proud of our Museum in a Box program, where we can “take the field trip” to other schools by sharing lesson plans, artifacts, and other resources to encourage museum-style learning regardless of school budget.

To see this learning model that we studied actually WORK in Georgia has been thrilling. I would love to see more museum schools in Georgia and continue to build a national network of educators.

But first – we need to build that media center!

What would you like new parents to know about the school that they may not know?

I want parents to know that they matter. The success of the school didn’t start in one person’s hands and it will still take a village to ensure its future success. We have a whole new generation of parents, with new connections and expertise and energy, and we need them to take the next phase and make it their own.

From a grant writer’s perspective, why is giving so important for continued success?
As a charter school, we do not receive funding for facilities and we will always need help to get to the next phase. We absolutely have to show foundations and other potential donors that our parents believe in the school, so much that they invest in its future. Whether it’s $5 or $50,000, every parent can show support and help edge that percentage of giving closer to 100%.

What makes a TMS education so special?
Every child has the right to a good quality, public education. My father spent his entire career supporting public education, and I am proud that The Museum School offers a choice in central DeKalb that is a model all over the state, and even the nation. You cannot buy this school community anywhere.