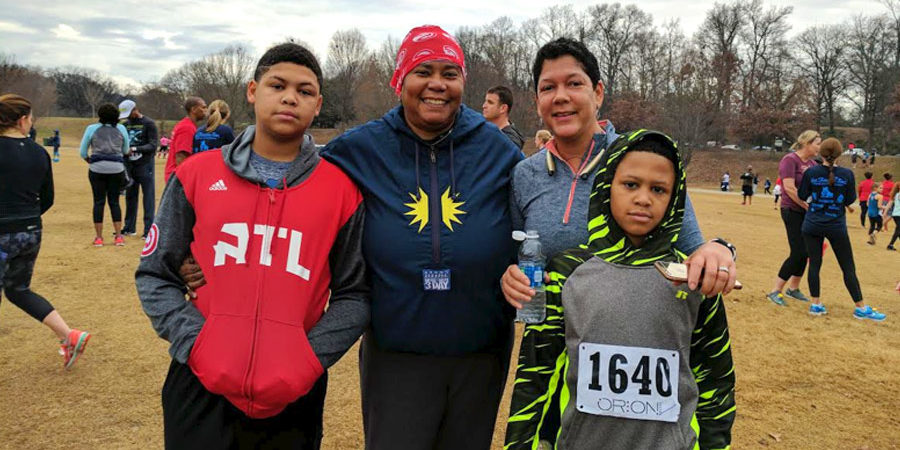 I met Shirley Harris late last year at a Curator’s Circle event. After a brief conversation about her family’s history with TMS, I knew this was a person who is dedicated- to her children’s education, to her community and to The Museum School. I had to know more about her family and their journey.

Tell me more about your family and how long have you been involved at TMS?
We have two boys and have been with TMS since the first day, August 9, 2010. Jelani was in the first kindergarten class while Djibril was with the first second grade class of 20 kids. Jelani age 11 is now in 6th grade and Djibril age 14 is in 8th grade. Djibril is at TMS. Jelani has applied to the lottery, so hopefully he will be back next year.

This is the point in your story where everyone says “Wait, what?” Your journey through TMS has been unique. Share with us why your family left TMS and, ultimately returned.
This is a very complicated story.  We made a decision to leave because we felt it was in the best interest for the boys as we looked towards high school. At the time, the feeder high school for TMS seemed to be up in the air. We made a decision to secure that future.

We came back for several reasons: the community support, old friends, ties to several families and a secure high school option. It was culture shock for our kids in a much larger school system. Djibril went from 44 6th grade students to 300 7th grade students. The school system was much less personal and lacked the nurturing feeling we received at TMS. The academics were solid in their new school, but socially it was a misfit.   As Djibril said, “When I was at TMS, I was a big fish in a little pond. Now I am just one of the fish.” In the end, we decided to come back to TMS where both boys thrived academically and socially. Djibril was able to get back in to finish his eighth grade. Jelani on the other hand, was placed on the waiting list.  He is looking forward to returning. Hopefully, we will have success in this year’s lottery. His closest friends remain many of the boys he has been in school with since kindergarten.

Expand on those points a little more for us. What was TMS able to provide that the other schools couldn’t.
Because TMS is small and we have been very active in the school, we became close to several families in the school and neighborhood. We appreciated the mutual support and the “it takes a village to raise a child” mentality. We also found the teachers knew the boys and were able to quickly address any academic or behavioral issues they noted.  We appreciated the commitment to encouraging athletics. Being a small, fitness encouraging school, the boys were able to get involved in a variety of sports teams at a very early stage. Through relationships with the YMCA, they have been able to represent TMS as they played with their classmates in basketball and soccer for several years at the elementary school level.

Being small, the commitment to art and music goes beyond expectations. Starting in the third grade, Djibril began to learn to play the violin as an integral part of his school curriculum. He has been able to develop his musical talents and moved on to play the cello in the 4th grade. He actually recently said he looks forward to playing forever. Not many public schools offer this option so early to the kids. It would be great if this was brought back into the school at early grade but I do appreciate that it is currently offered to start in the sixth grade.

Being an upstart, grassroots school, the level of parental involvement and commitment in those early years was extremely high and enthusiastic. There was an amazingly strong and infectious commitment to ensuring our children would have an excellent public school option.

We love the project-based learning being at the forefront of the education. The hands-on method in science, the costumed story telling or original songs for social studies made learning these things easier, more fun and more enduring.

Being an upstart, grassroots school, the level of parental involvement and commitment in those early years was extremely high and enthusiastic. There was an amazingly strong and infectious commitment to ensuring our children would have an excellent public school option.

What do you want to see for TMS in the future?
Wow! Endless opportunities. I would hope to see that TMS continues to remain one of the top schools in the state. I would love to see TMS grow to a K-12 school much like Drew Charter School. Of course, that would mean a new location or a split location and certainly lots of community and corporate support.

Creating a high school isn’t yet on the table. We’re still working to fund the new Media Center, but the sky is the limit! To that end, why is financial giving so important for continued success?
Parent contribution says you are committed. It tells a potential corporate or foundation funder, the parents are committed. If you sacrifice a few trips to McDonald’s or Starbucks, a few nights out for dinner per year, a few mani-pedi’s or other treats a few times a year, you can turn that into a nice donation to the school once a year. Just a simple way to come up with that once a year contribution that says, “I contributed. I’m in.”

You can carry on the tradition of giving at The Museum School, and help build the future for our Explorers. Click here to contribute to the 2016-2017 Curator Circle.